Ketamine vs. S-Ketamine — What’s the Difference? 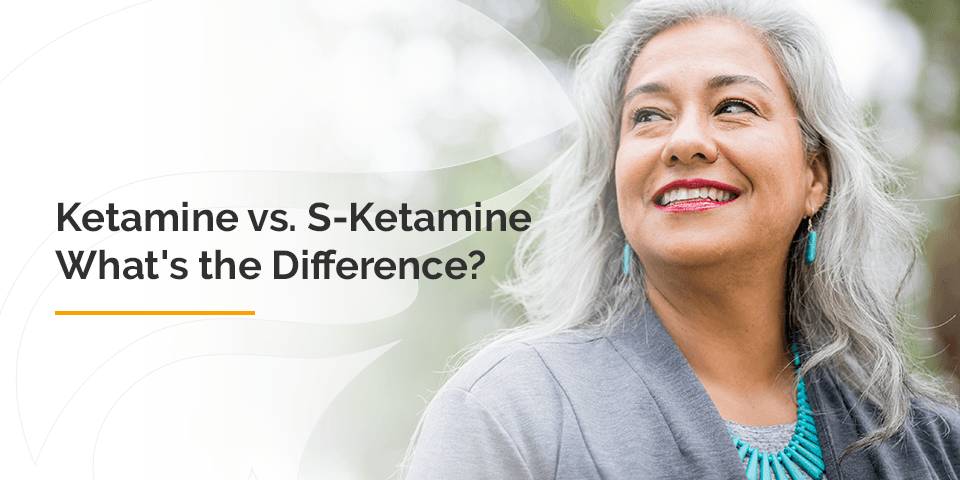 Major depression is one of the most commonly occurring mental health issues in the U.S. More than 17 million adults, just over 7% of the U.S. population, experience at least one episode of major depression annually, as of 2017. While many people can get relief from their symptoms and start feeling like their old selves again by taking antidepressants or undergoing therapy, not everyone responds to traditional medication and therapy. It’s estimated that up to 30% of people with major depression have a treatment-resistant form of depression (TRD).

A person is diagnosed with TRD after trying at least two forms of treatment and seeing no alleviation of their symptoms. When antidepressants and therapy alone don’t work, some patients with TRD get relief from their symptoms by combining an antidepressant with anti-psychotic medication, undergoing electroconvulsive therapy (ECT) or trying therapies that stimulate the brain. The drug ketamine, long used as an anesthetic, has also had promising results when given to patients with TRD.

The chemical structure of ketamine is a racemic mixture made up of two molecules, S-ketamine and R-ketamine. One way to think of the two molecules is like hands. They are mirror images of each other but can’t be superimposed on each other, just as your hands mirror each other but aren’t exactly identical. The two molecules bind differently with different receptors in your brain, helping to reduce symptoms of depression, including suicidality.

If you have TRD, your psychiatrist might recommend one of two types of ketamine to you for treatment — SPRAVATO™ (esketamine) or IV ketamine. Learn more about the medication’s two forms to see if one might be right for you.

SPRAVATO™ (esketamine) is a form of ketamine that only has the S molecule. In 2019, the Food and Drug Administration (FDA) approved esketamine as a treatment for TRD, making it the first form of ketamine to receive FDA approval as a depression treatment. The exact method esketamine uses to relieve depression symptoms isn’t fully understood, but it appears that the S molecule in the medication binds to N-methyl-D-aspartate (NMDA) receptors in the brain.

NMDA receptors bind to glutamate, a type of neurotransmitter. The bond between glutamate and NMDA receptors restricts the function of glutamate, which can trigger depressive symptoms. S-ketamine can increase glutamate levels, allowing the neurotransmitter to connect to alpha-amino-3-hydroxy-5-methyl-4-isoxazole propionic acid (AMPA) receptors. AMPA receptors improve communication among neurons in the brain, helping to stabilize mood and enhance cognition and thought patterns. 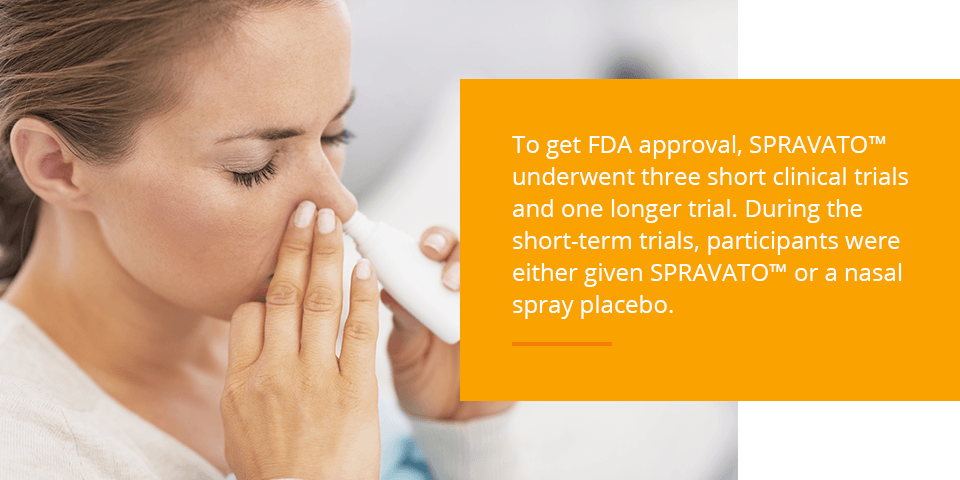 How Effective Is SPRAVATO™?

In one trial, patients who received SPRAVATO™ nasal spray had statistically significant results compared to those who took the placebo. During the long-term trial, patients who had a stable response or who were in remission but continued treatment with SPRAVATO™ and an antidepressant had longer periods between symptom relapses compared to participants who received the placebo.

Upon approval of SPRAVATO™ (esketamine), Janssen, the company that produces it, issued a press release that stated that the medication could help reduce symptoms of depression within 24 hours when used with an oral antidepressant. Some patients in the clinical trial saw an improvement of their symptoms within four hours.

At the moment, SPRAVATO™ isn’t FDA-approved as a treatment to reduce suicidal thoughts or to prevent suicide, but some evidence suggests the medication can help reduce suicide ideation.

How to Qualify for SPRAVATO™ (esketamine)

How Often Do You Take Esketamine?

The medication is effective in its alleviation of depressive symptoms, but the potential to abuse SPRAVATO™ (esketamine) exists. For now, the drug is only available under a Risk Evaluation and Mitigation Strategy (REMS) and only at certified treatment centers. A REMS protects the patient during treatment. Components of the REMS include:

At each appointment, the patient self-administers SPRAVATO™ using a nasal spray device. The nasal spray device contains 28 milligrams. Depending on their treatment provider’s recommendation, a patient will use two or three devices at each treatment.

Side Effects of SPRAVATO™ (esketamine)

SPRAVATO™ can cause some side effects, the most common of which are sedation and disassociation. These symptoms can cause a patient to feel disconnected from their thoughts or feelings. Other possible symptoms include nausea and vomiting, reduced sensitivity and increased blood pressure. People with high blood pressure might have a higher risk of experiencing adverse cardiovascular events while taking esketamine.

What Is IV Ketamine?

The intravenous form of ketamine contains R-ketamine and S-ketamine. It was first used in clinical practice during the 1960s as an anesthetic. Ketamine can be superior to other types of anesthesia, as it doesn’t interfere with a patient’s cardiorespiratory systems. It’s often the preferred anesthetic when treating children and can be safely used in patients as young as three months.

When administered intravenously, ketamine is 100% bioavailable, meaning all of it is effectively absorbed by the body. Other methods of delivering racemic ketamine are available, including intramuscular injection, intranasal — such as a spray — and oral. When the medication is used as an anesthetic, a non-IV form might be necessary if a patient is resistant or uncooperative.

In addition to its prevalent use in medical settings as an anesthetic, ketamine has a reputation for being a “party drug.” The drug became popular at raves and clubs in the 1990s because it can cause a person to disassociate from their surroundings. Ketamine can also cause hallucinations when used recreationally. Because ketamine can cause amnesia of events that occur when a person is under the influence, it has been used as a drug to facilitate sexual assault.

It’s important to note that the doses of ketamine used to create an anesthetic effect and to facilitate recreational use are much higher than the quantities employed when IV ketamine is given to treat TRD. Receiving ketamine in a clinical format ensures a patient will get a lower amount of the drug that does not produce dissociative symptoms. 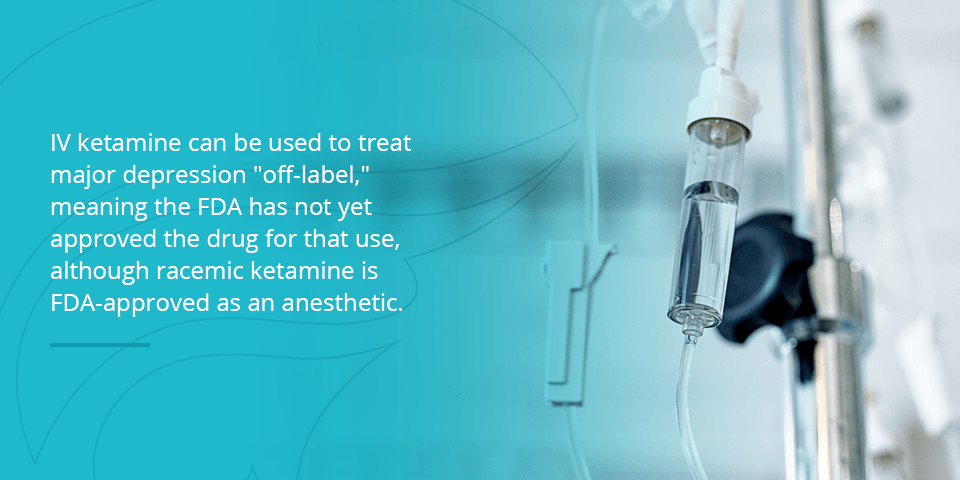 Like esketamine, racemic ketamine can help ease depression symptoms by increasing the amount of glutamate in the brain and by improving communication between neural receptors. The drug might also help alleviate depressive symptoms by reducing inflammation, which has been associated with mood disorders in the past. It accomplishes this by decreasing body signals linked to inflammation.

A recent research review has shown that inflammation may play a role in many treatment-resistant conditions, such as cases of major depression that display symptoms that can’t be remedied with antidepressants or therapy. Past observations have uncovered that almost all autoimmune and chronic disorders — which can heighten inflammatory responses in the body — have high comorbidity rates with depressive symptoms. Taking anti-inflammatory agents like ketamine could help decrease bodily inflammation and therefore reduce depressive symptoms.

How Often Do You Receive IV Ketamine?

You’ll need to visit a treatment center to receive IV ketamine infusions. How many infusions you need and how frequently you receive them depends largely on how you respond to the treatment. Many patients start with receiving six infusions, scheduled two or three times a week for a series of two or three weeks. You might see improvement in your symptoms after the first infusion. Alternatively, it might take several infusions before you see an improvement.

Continuing treatment with IV ketamine after the initial phase can help you maintain the medication’s effects but won’t likely lead to an increase in symptom improvement. Whether you feel like IV ketamine is working well for you and decide to continue treatment is something to discuss with your treatment provider.

As with SPRAVATO™, you receive IV ketamine under supervision. During each infusion at Principium, you’ll be in a private treatment room with at least two treatment providers with you at all times. Each infusion typically takes about an hour.

Side Effects of IV Ketamine

The side effects of IV ketamine are similar to the ones for SPRAVATO™. You might experience sedation or drowsiness and feel somewhat out of it. Nausea and vomiting are also possible, as is an increase in your blood pressure. 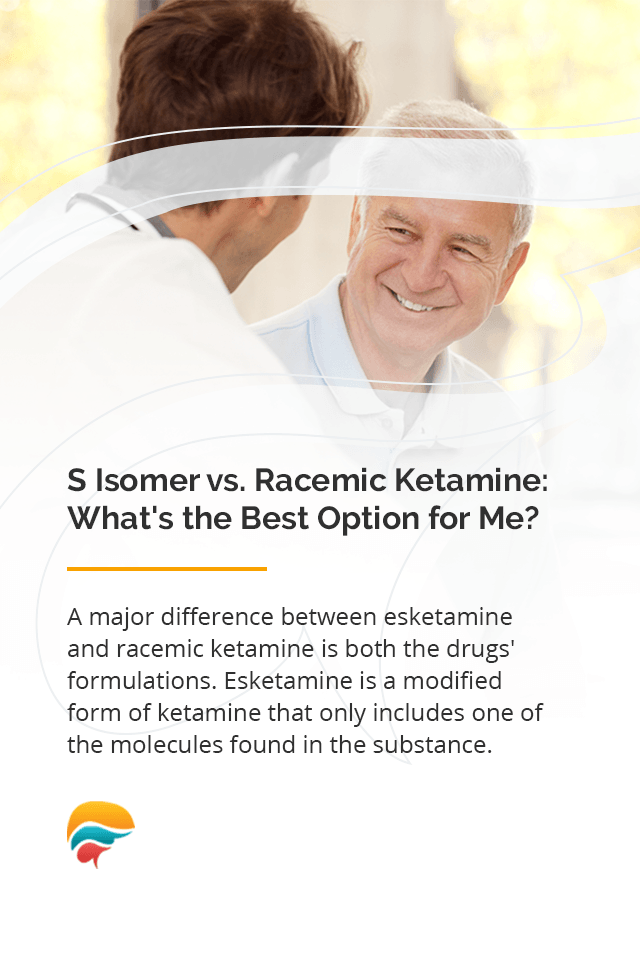 S Isomer vs. Racemic Ketamine: What’s the Best Option for Me?

If you have been living with major depression that has so far resisted other forms of treatment, ketamine sounds promising. But which option will be right for you — the IV or nasal spray? Both choices alleviate symptoms of depression in patients with TRD. Comparing and contrasting the treatment options can help you decide which one you want to try and start on the path toward effective treatment.

A major difference between esketamine and racemic ketamine is both the drugs’ formulations. Esketamine is a modified form of ketamine that only includes one of the molecules found in the substance. The drug modification was necessary to get it FDA approved as a treatment for depression.

Treatment time is similar for both forms of ketamine, although you might undergo treatment with SPRAVATO™ (at least eight weeks) for longer than you would with an IV infusion (three weeks).

Another thing to consider when deciding between IV ketamine and SPRAVATO™ is how you will pay for the medication and treatment. Since IV ketamine is an off-label treatment that isn’t FDA-approved to manage depression, insurance providers don’t offer coverage for it. That means you would be responsible for paying for this option out of pocket.

SPRAVATO™ is FDA-approved, which opens the door for insurance coverage. Whether your policy will offer coverage depends on the provider and the type of plan you have. Your insurance might cover some, all or none of the treatment based on your plan and whether the treatment provider you see is in-network or out-of-network.

If you are interested in using insurance to pay for your esketamine treatment, your best option is to contact your insurance provider before you begin taking the drug. Ask if your insurance company offers coverage if the treatment providers at Principium are in-network with your plan, and inquire about what your out-of-pocket responsibility will likely be. 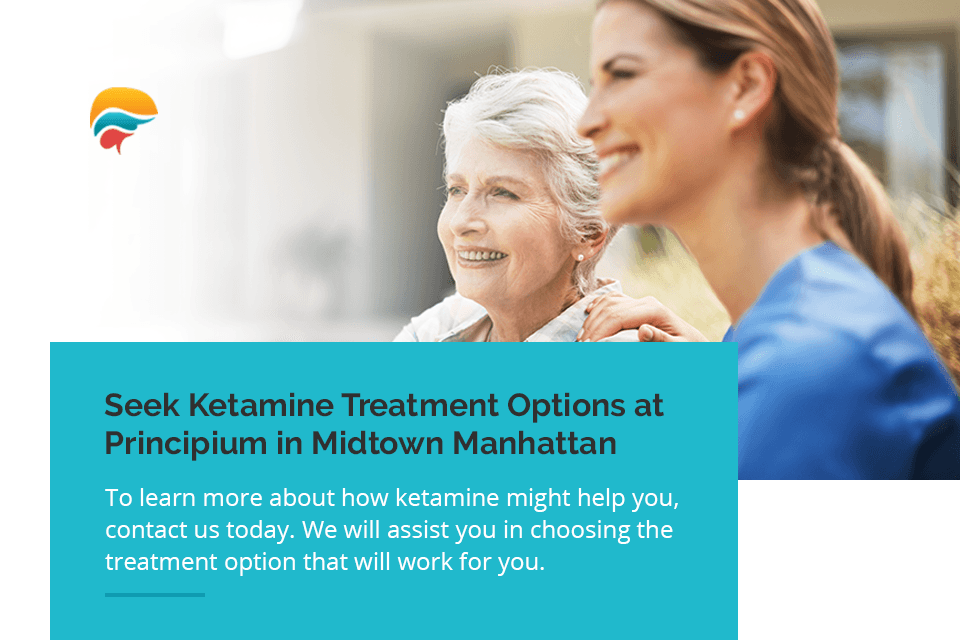 Principium Psychiatry specializes in the comprehensive treatment of mood and anxiety disorders, including major depression. Our goal is to provide state-of-the-art treatments to patients in the heart of New York City. Dr. Cohen and his team at Principium offer both SPRAVATO™ (esketamine) and IV ketamine treatment options. To learn more about how ketamine might help you, contact us today. We will assist you in choosing the treatment option that will work for you.

What Is the Difference Between Psychiatry and Psychology?
March 30, 2022

Can You Combine Ketamine Treatments With Other Medication?
March 30, 2022
Categories