TMS vs ECT—What’s the difference?

TMS (transcranial magnetic stimulation) and ECT (electroconvulsive therapy) are two of the most well-established, non-pharmacological interventions used in the treatment of depression that fails to respond to medications or talk-therapy. TMS and ECT are similar in that they are both non-invasive procedures that use neuromodulation to achieve their antidepressant effects. Neuromodulation is a method for normalizing dysfunctional neural pathways using electrical or magnetic currents to either stimulate or quiet down abnormally active brain cells. Changing the rate at which these neurons fire can influence the release of neurotransmitters, chemical messengers that allow the nervous system to function harmoniously and carry out complex physiological functions, including the regulation of mood, memory, attention, sleep, and motivation—all of which can be disrupted in disorders like major depression.

Below is a chart comparing the two treatments. 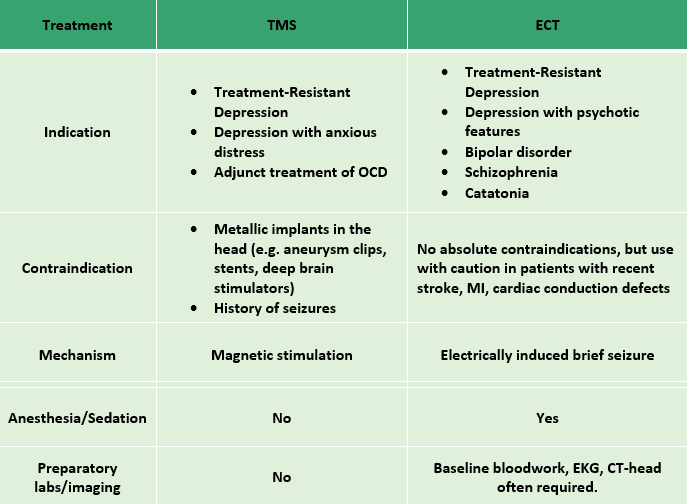 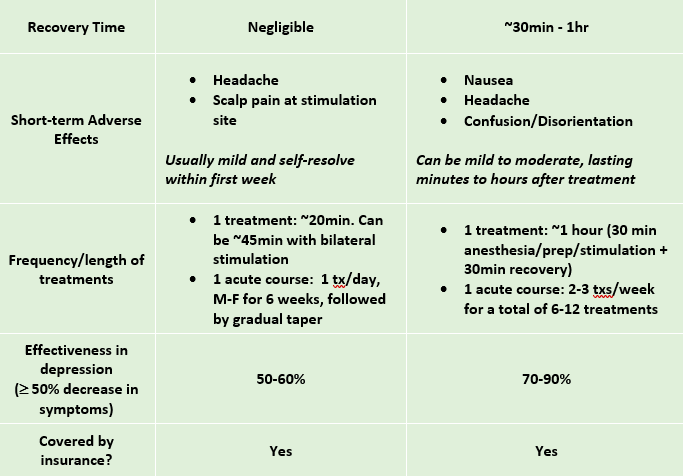 While TMS is a relatively recent treatment for depression, approved by the FDA in 2005, ECT is perhaps the oldest psychiatric treatment still utilized today. It has been successful in treating a wide range of conditions other than depression, including bipolar disorder, schizophrenia, and catatonia.

First introduced in clinical practice in the 1930s, ECT is a procedure in which small electrical currents are passed through the brain to trigger a brief generalized seizure. While scientists don’t know the precise mechanism by which ECT alleviates specific symptoms, the seizure activity appears to alter brain chemistry in a way that “resets” dysregulated circuits of mood and cognition and promotes the growth of new neuronal connections. This is similar to the way

Sometimes referred to as “electroshock therapy” in popular culture, ECT has come a long way from its oft-maligned, stigmatized depictions in TV and movies, which harken back to a time when large doses of electricity were used without anesthesia. Today, the use of general anesthesia, muscle relaxants, improved dosing of electrical energy, and targeted electrode placement has established ECT as a safe, well-tolerated, and highly effective psychiatric intervention.

How is ECT performed?

ECT is typically conducted in a hospital-based setting by a psychiatrist and an anesthesiologist. During the procedure, the patient is placed under general anesthesia, and a muscle relaxant is used to stop the patient’s muscles from moving during the seizure. Cardiac monitors check heart rate and blood pressure during and after the procedure, while four electrodes are placed on the scalp—two to monitor brain waves for seizure activity, and two to deliver short, controlled electrical pulses.

In general, there are 2 types of ECT. In bilateral ECT, electrical current is passed through both sides of the head whereas in unilateral ECT, current passes through just one side. Most clinicians prefer to administer unilateral treatment, which comparison studies have shown to be just as effective as bilateral treatment but with fewer side-effects, particularly memory loss.

The electrical stimulation itself typically lasts 30-60 seconds, while the anesthesia will last approximately 10-15 minutes. After this, the patient will move to the recovery room for 20-30 minutes to ensure that pulse, blood pressure, and breathing return to normal after the anesthesia has worn off.

Treatments can be given in both the inpatient and outpatient settings, usually 2-3 times per week for 3-4 weeks, for a total of 6-12 treatments. After an initial course of ECT, patients can continue to receive maintenance treatments periodically to prevent relapse.

What are the side-effects of ECT?

ECT is one of the safest procedures performed under general anesthesia. Some of the common side-effects and risks with ECT are the same as those associated with any procedure that utilizes general anesthesia. These include post-procedure confusion that can last anywhere from a few minutes to an hour, headache, nausea/vomiting, muscle stiffness, and a feeling of disorientation.

Aside from these temporary effects largely due to the general anesthesia, lingering memory loss is a common concern among those who receive ECT. Both anterograde and retrograde amnesia (the ability to form new memories or to recollect old ones, respectively) has been associated with ECT, with retrograde amnesia being the most common. Memories of events immediately surrounding the ECT are most vulnerable to permanent loss.  Up to 80% of patients can report some degree of memory loss, with 30-50% endorsing some degree of persistent memory loss at least 6 months after the final ECT treatment.

Is ECT effective for depression?

ECT it is considered the gold-standard for severe, treatment-refractory depression, with a response rate of 70-90% compared to 40-50% for antidepressant medications. In addition, ECT works faster than commonly prescribed SSRIs, which can take up to 4-6 weeks to exert their effects. Most patients undergoing ECT cite significant improvements (i.e., decrease in half of their depressive symptoms) within the first week, with some experiencing relief even after the first session. Retrospective chart review studies have found that patients who respond early in a course of ECT have a greater likelihood of ultimately achieving remission, and that more severely ill patients, such as those with suicidal ideation, vegetative symptoms, or concurrent features of psychosis, tend to respond better to ECT.

To summarize, both TMS and ECT are highly effective treatments for depression that utilize non-invasive methods of neuromodulation to achieve their antidepressant effect. However, whereas TMS uses magnetic pulses to stimulate specific brain areas, ECT uses electrical pulses to induce a brief, generalized seizure, which affects the brain globally. In both cases, symptom relief is thought to be due to chemical and cellular changes induced by the stimulation of brain cells. These changes can improve communication between different regions of the brain that may have become overactive or underactive in the setting of depression.

Both treatments work quicker than medications, with an anti-depressant effect noted usually within the first 2 weeks of treatment and sometimes as soon as the first few sessions.

Studies suggest ECT may be slightly more effective than TMS for cases of severe treatment-resistant depression. However, most patients prefer TMS because it does not require general anesthesia or sedation (nor post-procedure recovery time), has fewer side-effects (e.g., mild headache and localized scalp pain, which is generally mild, short-lived, and resolves completely after the first few treatments), and does not incur any long-term negative effects on cognition or memory, which is a common complaint for patients following ECT.

For both TMS and ECT, maintenance treatment—ranging from once weekly to once every several months, depending on symptom severity—is an option for those who experience returning symptoms.

What Is the Difference Between Psychiatry and Psychology?
March 30, 2022

Can TMS Be Used to Treat Anxiety?
December 22, 2021
Categories