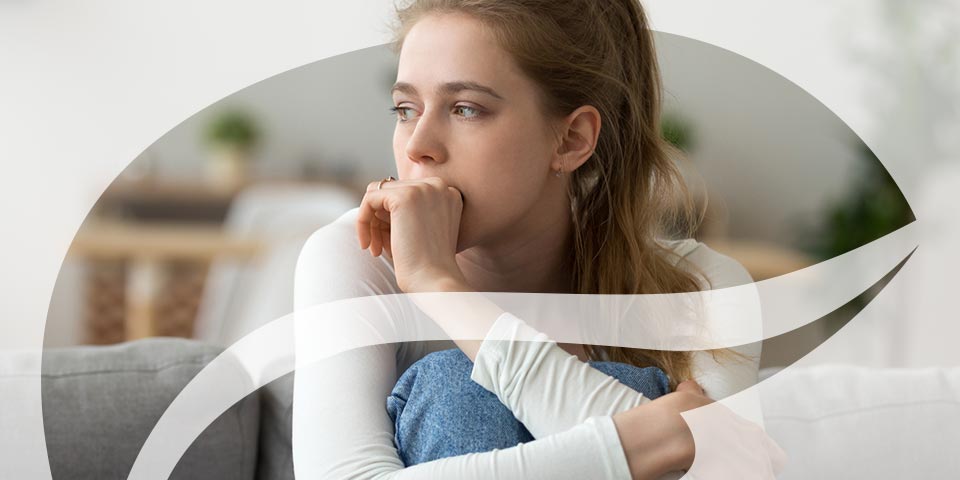 Mounting research suggests psychedelics may effectively treat depression and other mental health disorders. Ketamine, MDMA, psilocybin and ayahuasca are hallucinogens that may bring relief to people with depressive or anxious symptoms, even those whose symptoms do not respond to traditional antidepressants.

Most of these psychedelics only need to be taken a few times to provide relief, revealing the effectiveness of psychedelics in treating chronic conditions. They differ from traditional antidepressants, which can take months to work and are often taken daily for months or years. If you or a loved one has depression, you may want to learn about the effects of these psychedelics and how they can help.

MDMA for Depression and Other Disorders

MDMA (3,4-methylenedioxymethamphetamine) is an illicit drug that alters mood. It’s both a stimulant and a hallucinogen, affecting behavior and mood by changing the release of chemicals in the body.

Researchers are currently looking into ways pure MDMA affects the brain. Several studies suggest it could be used within a clinical setting to improve mood. Reactions to MDMA depend on the dose taken, the type used and the patient’s genetics, among other factors.

Learn the effects of MDMA, potential therapeutic benefits and risks of using the drug to treat mental health disorders.

MDMA increases the neurotransmitters norepinephrine, dopamine and serotonin. This rise in serotonin causes an elevated mood. A potential benefit of using MDMA is its ability to quickly alter a person’s mood and provide relief from depression.

Traditional depression treatment medications like selective serotonin reuptake inhibitors (SSRIs) can take up to six weeks for a person to notice their effects. In contrast, MDMA may provide instant relief from depressive or anxious symptoms, with researchers gathering further evidence to confirm the long-term antidepressant results of this drug.

While MDMA isn’t a legal prescription medication, researchers are investigating its use as a potential treatment for depression, post-traumatic stress disorder (PTSD) and anxiety:

While more investigation is needed, these promising results have led some researchers to suggest MDMA might also help treat patients with conditions like obsessive-compulsive disorder (OCD), eating disorders and substance use disorders. As soon as these studies are complete, health providers will know more about the best dose, results and long-term effects of MDMA for clinical use.

Because MDMA is often combined with other street drugs, it’s difficult to know its full impact and risks.

The most severe risks include addiction and overdose. While researchers aren’t sure how addictive MDMA is, it affects the brain similarly to other addictive drugs, suggesting the same risk for people taking it outside a clinical setting. And when combining this drug with other substances, the risk of overdose increases which can cause symptoms like high blood pressure, seizures and heart problems.

MDMA may also cause side effects such as:

As stated, MDMA affects the body’s serotonin levels, which can lead to feelings of happiness and a greater sense of well-being. When this initial increase ends and the serotonin levels decrease, this reduction may cause a depressed mood in some people. Additionally, combining MDMA with antidepressants can produce dangerous side effects since these medicines can increase the risk of serotonin toxicity, a dangerous drug-induced condition. 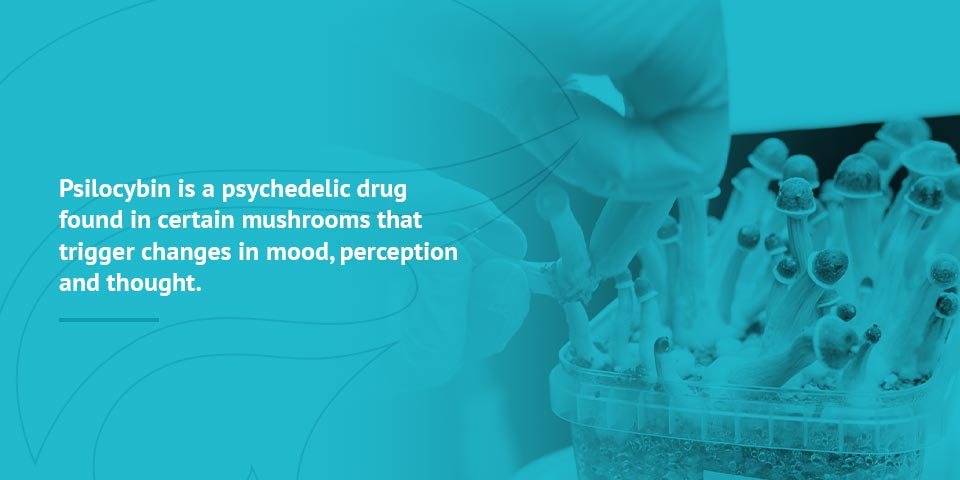 Psilocybin is a psychedelic drug found in certain mushrooms that trigger changes in mood, perception and thought. When psilocybin is taken, the body converts it to psilocin, a chemical with psychoactive properties. Researchers have investigated clinical uses of this drug, revealing the positive short- and long-term effects it may have on the brain.

Psilocybin affects the brain’s 5-HT2A receptors, which are often bountiful in the brains of people with depression. Researchers believe this drug may briefly disrupt these connections and allow them to reform in new ways, interrupting rigid thought patterns that can impact a person’s well-being.

These discoveries suggest a therapeutic nature associated with psychedelics that may alleviate psychiatric conditions linked to negative, fixed thought patterns.

While clinical studies reveal several benefits of treating psychiatric conditions with psilocybin, researchers are still studying the risks. The quality of the drug a person consumes, past experiences and expectations of the experience can all impact psilocybin’s effects.

A recent study discussed self-reported adverse effects of psilocybin. Notably, the study found that combining psilocybin with other substances presented long-term negative outcomes, while single doses were linked to “bad trips” or induced fear and distress. These findings suggest the need to help people with their current anxieties while administering the drug. Additionally, since psilocybin is currently illegal, the study suggests that adverse outcomes may be associated with illicit use, such as combining substances or a lack of information about the freshness of mushrooms.

Side effects that may occur due to psilocybin use include:

While research suggests low toxicity and low risk of addiction and overdose, the adverse long-term outcomes of psilocybin are not as clear.

Ayahuasca is a brew of two plants native to the Amazon. One of the plants in ayahuasca tea contains monoamine oxidase inhibitors (MAOIs), the active compound found in the first antidepressants ever made. The compound helps activate leaves used in the hallucinogenic tea from another plant with the psychedelic chemical DMT (N,N-dimethyltryptamine), which is a substance often used in psychedelic therapy for depression and anxiety.

Indigenous peoples across South America traditionally use the concoction in religious ceremonies. However, people from all over are trying ayahuasca for its potential to treat their depression, addiction and PTSD.

Like psilocybin, ayahuasca affects the 5-HT2A receptors in the brain. Many believe it can be a tool to erase trauma in those with PTSD and addiction. Some researchers believe the medicinal plants lower a person’s defenses, allowing them to address their traumatic memories without fear or stress.

When appropriately administered in a controlled setting, ayahuasca shows promise in relieving mental health conditions as a form of depression treatment. A recent study found that ayahuasca significantly benefits those with major depressive disorder. Participants who responded positively to the drug were those who found previously prescribed antidepressants ineffective.

Scientists have measured brain activity to study these changes in perception. CT scans, MRIs and other tests discovered more activity in regions of the brain involved in emotions, memory and emotional processing. These changes may allow people to process their past experiences differently.

As for addiction, since ayahuasca appears to raise serotonin levels, it may ease withdrawal symptoms when someone quits substances. It may also weaken the pleasure of using these drugs, helping people overcome addiction.

Side Effects and Potential Drawbacks

While people taking ayahuasca for PTSD may learn to process their trauma and move past it, there’s a potential risk that the remedy could retraumatize someone. The brew also brings about risks like raised blood pressure. It’s not safe for pregnant women or those with glaucoma, heart problems or disorders related to fat metabolism.

Ayahuasca is also not safe when taken along with prescribed SSRIs or MAOIs, ginseng or cough medicines containing dextromethorphan.

Side effects of ayahuasca can include:

One study reviewed scientific reports of psychotic episodes associated with ritual ayahuasca and recreational DMT intake. Many of these cases involved those with a personal or family history of bipolar disorder or psychosis. The risk of psychosis may also increase when combining the substance with drugs like marijuana or an increase in the frequency of DMT intake.

The data suggest the importance of taking ayahuasca or DMT in a controlled setting to reduce the possibility of psychotic experiences, particularly for those with a personal or family history of schizophrenia, mania or bipolar disorder.

Ketamine is a dissociative anesthetic initially used as an anesthetic in human and veterinary medicine. While ketamine has been used for decades as an anesthetic, medical professionals have recently begun using it for treatment-resistant psychiatric disorders like depression, PTSD and anxiety. With effects similar to other psychedelics, many describe it as producing a dissociative state lasting from one to two hours.

The non-psychedelic form of ketamine is approved by the Federal Drug Administration (FDA), with many studies demonstrating the effectiveness of ketamine therapy for depression treatment.

Ketamine infusion therapy is an innovative treatment method that involves administering small doses of ketamine as an antidepressant. Delivering the drug directly into the bloodstream through an IV can have a stronger effect on people with depression.

Ketamine is believed to relieve symptoms of depression by binding with the neurotransmitter glutamate in the brain. This neurotransmitter is frequently dysfunctional in those with depression. By activating these receptors, ketamine has been found to promote the regrowth of damaged neurons due to prolonged exposure to stress, possibly leading to long-term depression remission.

The two main variations of ketamine therapy are IV ketamine and esketamine for depression. These treatment options can help conditions like:

Benefits may occur after just one treatment, though medical providers typically deliver several treatments for a more effective response.

While short-term ketamine therapy is linked to improved well-being and reduced depression, long-term use can present several health risks. There is little research into the long-term misuse of ketamine. However, some research shows that chronic use can lead to impaired memory and reduced mental well-being.

Other studies have found that ketamine use can cause urinary tract problems, from an increased urge to urinate or pain during urination.

Other side effects of ketamine use include elevated blood pressure, hallucinations, agitation, confusion and tremors. Discuss ketamine therapy with your doctor to determine whether the benefits outweigh the potential risks before proceeding. 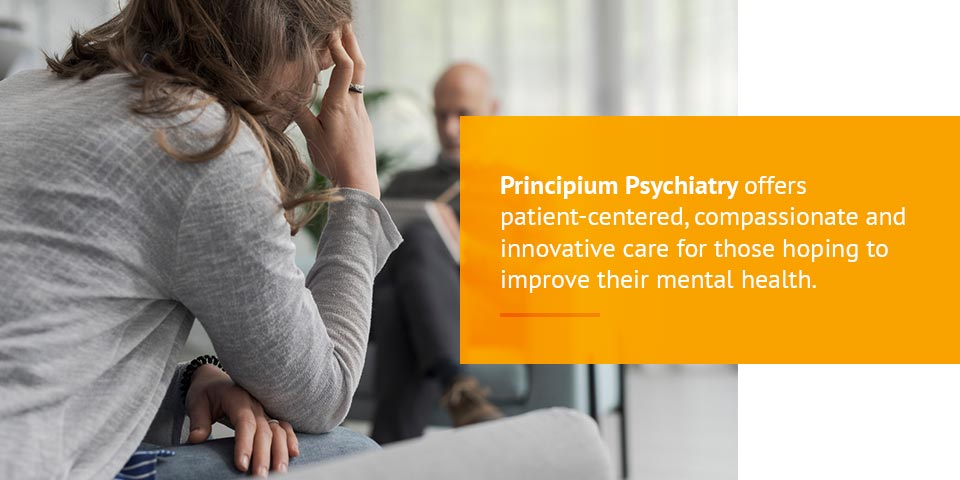 While existing medications are not always helpful for people with a mental illness, studies suggest the effectiveness of psychedelics for depression and anxiety.

Principium Psychiatry offers patient-centered, compassionate and innovative care for those hoping to improve their mental health. We prioritize your comfort with comprehensive medication therapy and psychotherapy for various anxiety and mood disorders. Our private, professional and supervised ketamine infusions can help treat depression and improve your well-being.

To learn more, we invite you to contact us today.

Repairing Damaged Brain Circuits: A Theory on How Ketamine Works for Depression
May 9, 2019