How Long Does a TMS Treatment Last? 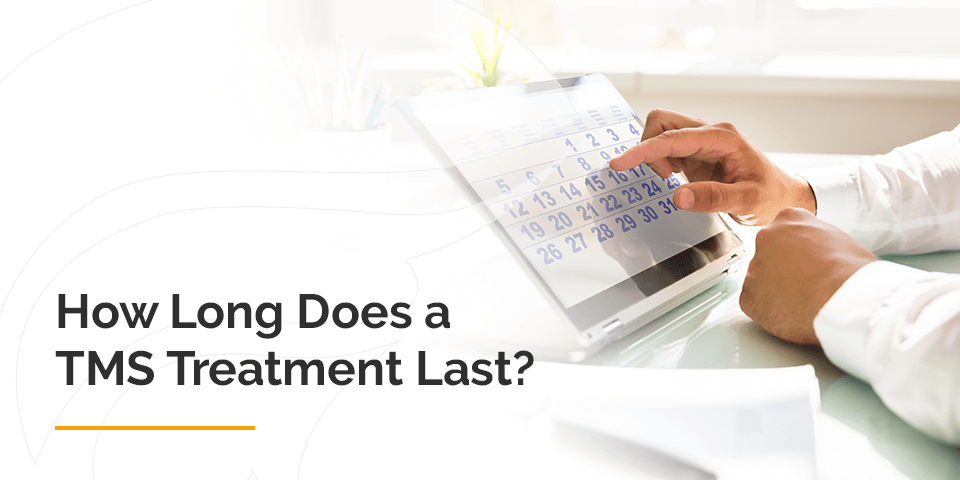 Transcranial Magnetic Stimulation, or TMS, is one of the newer ways to treat mental illnesses, especially major depression. All the data so far has indicated a safe, effective and non-invasive treatment for depression with little to no adverse side effects.

As with all new treatments, patients might worry whether the results — no matter how promising they may seem at first — will last for the long term.

What Is TMS Treatment?

TMS treatment is a type of therapy developed in the late 1980s to treat major depression. Since then, TMS therapy for anxiety has proven successful in many cases, and some doctors even recommend TMS for illnesses like Alzheimer’s disease and nicotine addiction.

Using electromagnetic coils, TMS stimulates specific parts of the brain, which lessens or erases symptoms of clinical depression. It’s best for those who have not made the desired progress with traditional treatments — like medication and psychoanalysis — and is far safer than treatments like electroconvulsive therapies. 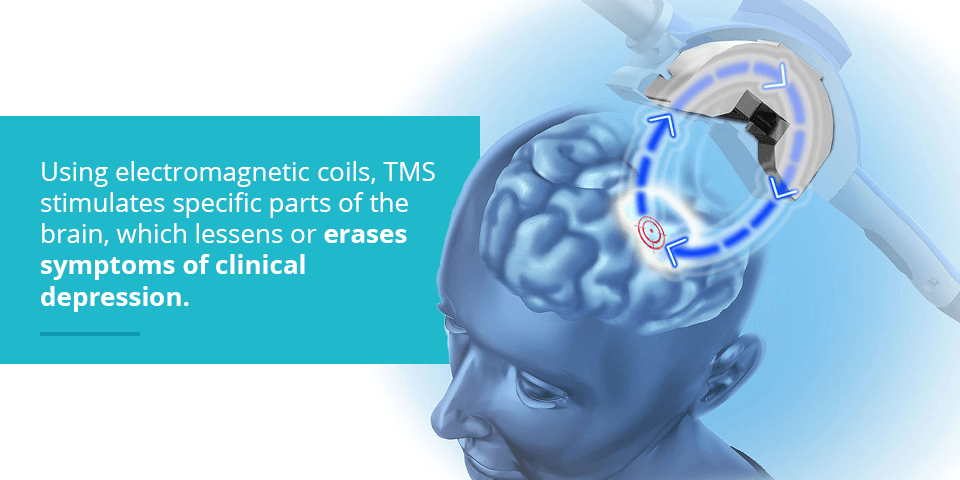 What Are the Short-Term Effects of TMS?

The risks of TMS are very few, and most of them are side effects occurring shortly after treatment. Therefore, it’s easy to weigh the pros and cons of TMS therapy, since the former far outweigh the latter.

Some of the most common immediate side effects of TMS include:

One of the rarer side effects of TMS is a seizure, so those who are at a high risk of seizure — people with epilepsy, for example — will likely not be good candidates for TMS treatments unless the seizures are controlled with epilepsy medication. Hearing loss is also possible if you don’t wear adequate ear protection during the procedure.

After the very first session, you’re unlikely to feel any different. However, consistent treatment will gradually help ease the symptoms of depression for most people.

Do We Know the Long-Term Effects of Repetitive TMS Therapy?

Some people who receive TMS therapy for anxiety or depression see the illness regress and never reappear. Others see a decrease in their symptoms, but not a total regression of the illness. Some don’t respond to the treatment at all. 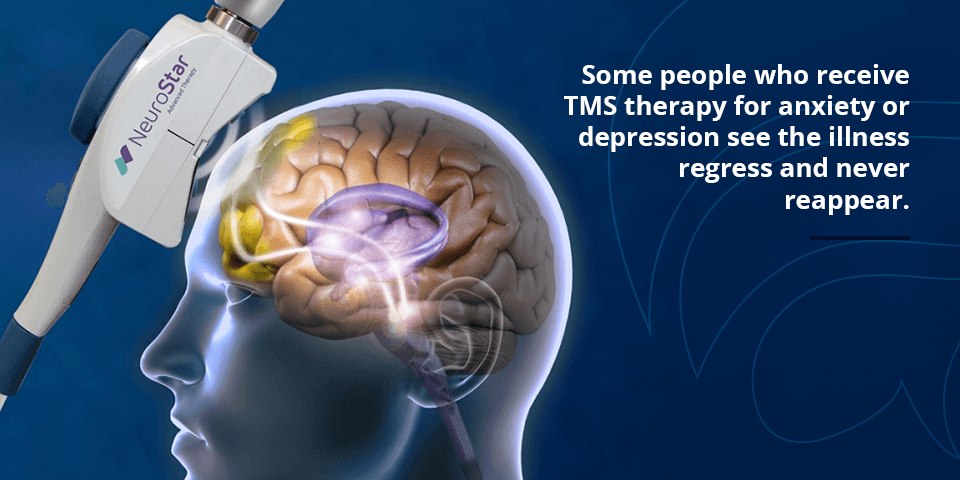 How Long Do the Effects of TMS Treatment Last?

A 2010 study looked at the long-term effects of TMS treatments and found that most of the patients continued to see the positive effects of the therapy for a year or more. These included clients who were completely in remission and those who remained in remission temporarily before needing more therapy sessions.

The human brain is still a mystery in many ways, and depression can certainly wax and wane. For some patients, maintenance treatments with TMS help address these symptoms.

Those with mild depression usually only need one course of TMS treatment to achieve a long term remission. These people might be able to live the rest of their lives without treatment for depression. Others may see an improvement only temporarily before needing to return to therapy.

Some of the people who return to TMS therapy after the first round of treatment may end up needing lifelong treatments to maintain their remission, often while taking antidepressants at the same time. Others may need it for longer before they find relief from their symptoms.

Patients do not develop a tolerance for TMS treatment, it seems, which means you can have as many rounds as you need, for as long as you need them.

What Is the TMS Treatment Process?

TMS is a non-invasive method, performed by a doctor, that requires no sedation. You’ll sit comfortably and insert a pair of earplugs to protect your hearing, and your doctor will place electromagnetic stimulation coils on your head. Your mental health provider will adjust these coils to target specific areas of the brain. For example, to treat depression, the coils will target the prefrontal cortex, which controls moods.

Having prepared and secured the coils, the doctor will administer magnetic pulses to stimulate the brain. One treatment session lasts 17 to 40 minutes. During this time, you might feel a tingling or tapping sensation in the scalp. The pulses encourage the neurons in the brain to send electrical impulses, which trigger a chemical reaction to improve mood. The more therapy stimulates your neurons, the more feel-good chemicals they’ll release.

TMS treatments are one of the safest because the electrical current is converted into an electromagnetic pulse rather than being delivered directly to the brain (as in ECT). Unlike with electroconvulsive therapy (ECT), TMS is not associated with memory loss. The use of electromagnetic pulses rather than electricity means there are fewer side effects to TMS in general, and those that may occur are very mild and short-lived.

People generally do not need to make any preparations for TMS therapy, and can resume their daily schedule immediately after.

TMS is an intensive treatment, though, with the first round of sessions generally lasting five days a week for four to six weeks. After that, there is a tapering off, in which you’ll gradually reduce your number of sessions before stopping them altogether. Those who may need to return for further rounds of treatment likely won’t have to do so five days a week again — two or three days a week may be sufficient. 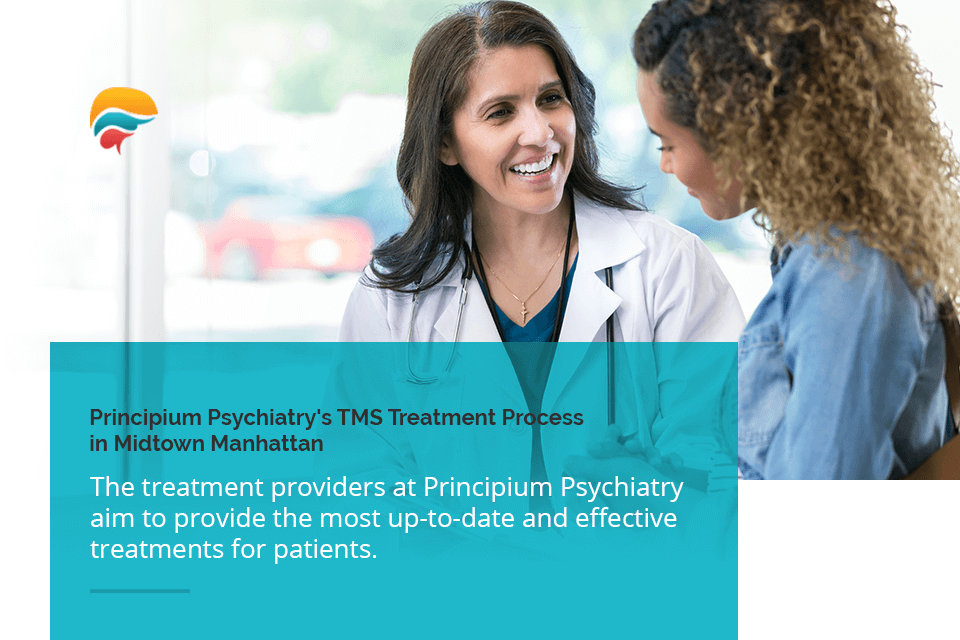 The treatment providers at Principium Psychiatry aim to provide the most up-to-date and effective treatments for patients, which is why we provide TMS treatments, along with other approaches like psychotherapy and ketamine therapy.

Both TMS and ketamine therapies have proven benefits for treating depression, so if traditional methods don’t seem to be helping as much as you’d like, get in touch to find out more about our TMS treatment.